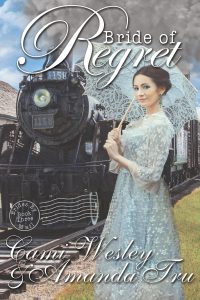 He lost one bride, but now he can’t seem to rid himself of another!

Pete Harding is a man haunted by regret. But when four mail-order brides are stranded at his ranch, he may need to rethink his belief that women don’t belong on ranches.

When her train is derailed, will her heart be as well?

Jo Franklin finds herself stranded on a Texas ranch. She has waited so long to start her life, and after deciding to be a mail-bride bride, she is now on hold yet again before she meets her fiancé. But while she strives to keep her temper amidst a series of humorous episodes with an infuriating cowboy, she also struggles to keep her heart on track toward her would-be husband.

But what if the man waiting for her at the end of the line isn’t who she thinks?