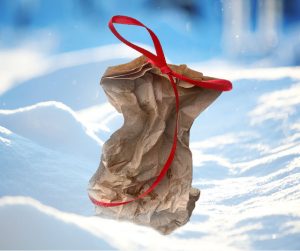 I’ve always believed that a compelling story can be written about anything, even a paper bag. After all, the quality of a story doesn’t depend on the topic as much as the writing. So I decided to take the challenge and put my paper bag theory to the test!

So, here you go! Want to see if a paper bag can touch your heart? Make sure you read all the way to the end!

The brown paper bag slid from her fingertips, the wind conspiring with icy snowflakes to whip it away from the open car window.

Frantic cries of “Daddy, stop!” accompanied the bag’s exit, but the car sped away, the brake lights never flashing red.

The bag flew behind the vehicle as if on wings for a few glorious seconds before plastering against the windshield of another car. The car swerved while the driver yelled insults at it and the world in general until the bag lost its grip, flinging away from the smooth glass and tumbling to a landing in the middle of the road.

Snow continued to fall, dotting the bag with pinpricks of moisture until they joined together, transforming the once crisp brown paper into a soggy film that melted to the road.

A cat darted across the street, stopping to sniff the bag and the faint aroma of Christmas cookies lingering on it. The cat startled, looking up as headlights spotlighted its glowing eyes. Waiting for the last second, it crouched over the bag, daring the approaching car closer. Suddenly, it took off, streaking across the road as the car weaved, trying to avoid the dark shadow.

The bag waited patiently as traffic slowed with the night. Snowflakes no longer melted against it but formed a layer of ice, pinning it to the hard asphalt. Fluffy snow piled on top until the bag became part of the landscape, no longer distinguishable from the rest of winter.

Finally, dawn peeked over the eastern hills and a pair of huge glowing beacons, brighter and louder than any others, came barreling toward the bag. With a loud scraping against the asphalt, they scooped the bag up in an avalanche and carried it down the road to join a massive wall of snow. The vehicle backed away, but the bag clung to its metal shovel until the unsteady grunting and jerking became too much. Reluctantly, it released its hold, once again falling to the ground.

The sun chased away the last shadows of night. A speedy little car buzzed past, its tires running directly over the bag, imprinting its tread on the wet paper and carrying it along for the space of a dizzying merry-go-round ride until it stopped at a gas station. The bag escaped only to stand sentinel in the slush as a long line of cars stopped, pumped their gas, and left, no one seeing the brown paper bag beside them.

A woman stepped out of her car and checked her watch. Her movements hurried as she pushed buttons on the pump. She stepped back, her foot landing directly on the bag. Like glue, the wet paper clung fiercely to her shoe, and when she stepped, the bag came with it.

Grumbling, she reached down and ripped the bag from her shoe. With two disgusted fingers, she held the wet piece of trash away from her and marched it over to the garbage can where it belonged.

Thoughtfully, her now curious fingers carefully pried apart the gooey paper. She reached inside and pulled out a plastic sandwich bag. Nestled inside, kept safe from the bag’s obvious trauma, was a picture of a little boy with an ornament frame around it. The little frame had been painstakingly colored with a Christmas rainbow of markers. With the picture ornament was a note written in a child’s hand:

I made this for u. I hop God lets u hve

The woman held the paper bag and its contents for a long time. Then she placed everything in her car, finished with the gas pump, and drove away. The paper bag spent all day on the passenger seat of the woman’s car. By the time she returned, the bag was dry and crinkly once again.

They drove to a store. The woman got out and eventually returned with a large, helium-filled balloon. She then drove to a park with heavy drifts of snow resting against the trees. She took out her phone and snapped a picture of the boy’s little face smiling from the ornament. Then she gathered the balloon in one hand and the bag and its contents in the other and marched through the snow to the center of the park.

With cold fingers, she tied the paper-framed ornament to the long string attached to the balloon and bowed her head. When her eyes opened again, she held the balloon outstretched. Then her fingers slowly parted and released it.

She watched as the balloon lifted high in the leaden sky, the little gift swaying gently on the string below. She snapped a picture with her phone then opened an app. Her fingers numbing with cold, she quickly typed out a caption:

Hey, Max, I don’t know you, but I found your paper bag with the present for your mom. Don’t worry. I sent it off to heaven. I know she’ll love it.

After posting, she looked back up in the sky, watching until she could see the balloon and its precious cargo no more. With a sigh, she turned and walked back to her car, still holding the crumpled, torn paper bag in one hand. Beside her car stood a trash can. She walked over to it. The paper hovered once again over the garbage, waiting for its release.

But her hand drew back. She looked at the bag, and her fingers gently smoothed out the wrinkles that could never be erased.

She got back into the car and placed the empty bag back on the passenger seat beside her.

Maybe she’d throw it away later.

After all, it was just a paper bag.

“The Paper Bag” has a longer “sequel,” and I’m offering it for free to newsletter subscribers! To subscribe and find out what happens next, click here.

And to think it all started with a paper bag!

📂This entry was posted in Uncategorized

« The Words You Need to Hear When I Fail »