The Words You Need to Hear 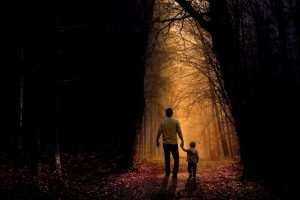 Last week was a rough one. Nobody was sick. No tragedy occurred. In fact, there really was little worth complaining about. It was just one of those weeks, like so many in typical 2020, where you get to the end and think, “Whew! That was rough!”

Part of what made it tough for me was that it was tough for one of my kids. I remember my mom saying that when you have multiple kids in the house, every day is a bad day for somebody! Since my heart walks around on four different pairs of legs, the chances of it hurting are pretty high.

In this case, some of the “tough” had to do with my son’s math test.. It’s been a tough math year so far this year, so he was pretty nervous about it. Don’t get me wrong, he’s extremely smart and good at math, which makes the challenge of this year even more frustrating. The night before his test, he reviewed and studied for about three hours. I sat beside him, checked his answers with my own work, and made sure he was understanding the steps of the oft-times complex algebra problems. At the end of the night, I was confident that he knew his stuff. I was wiped out tired and reaching back decades to remember how to graph little numbers and letters on a grid I could barely see. He ended up telling me what I did wrong when our answers didn’t match and understood the material inside out and backwards. I prayed with him before bed and called it good, feeling confident that there was nothing more he could have done to prepare.

The next day, I got an email from my son while he was at school. Obviously very upset, he told me he’d gone in at lunch to finish his test and scored the lowest grade he’d ever gotten on a math test in his life. Honestly, my first inclination was to try to find out exactly what went wrong. Did you not check your answers? How exactly did you mess up? Fortunately, I read between the lines of his few words. My easy-going, Pollyanna boy was frustrated and saying things like “take me out of this class. I can’t do it.” I took a deep breath and a few minutes before responding. He was frustrated, upset, and worried about how I would react.

What does he need to hear right now?

Then, slowly, I typed only a few words in reply: “It will be okay. We will figure it out. I love you.” Then I clicked send.

He soon replied with only two words: “Ok, thanks.” But even in those two words, I knew that the waters of his emotions were calmed. Because he believed me. He believed it would be okay. He believed I would help him figure it out. And he believed I loved him.

As I drove to pick him up at the end of the day, I was reflecting and thought about how many times, even as adults, we just need someone to say those same words I spoke to him.

Then I heard a gentle whisper. Don’t I always?

I then realized that the Bible proclaims that very message in every page. God has written it there for all to see. But His message to us is even more beautiful and powerful than mine to my son. For God’s words say something slightly different.

It will be okay. I have it figured out. I love you.

We often feel like we’ve gotten ourselves into a hopeless situation that we can’t manage to get out of. And we’re probably right. But no situation, no screw up, no tragedy comes as a surprise to God. He knew it was coming, and He already has a plan to get us through it.

One of the most frequently misinterpreted verses in the Bible is Jeremiah 29:11 “For I know the plans I have for you, declares the Lord, plans to prosper and not to harm you, plans to give you a hope and a future.” People often whip out this verse as a band aid when someone is going through something tough. However, if you read the context of the verse, you realize that God didn’t say this at the end of a tough time, but at the beginning. After those words were spoken, things went from bad to worse, at least if you were keeping tabs on the outside circumstances. But God doesn’t work the short game. Through that verse, He was telling His people that things are going to get bad. You’re going to face tragedy, persecution, and dark times. Not everyone was going to make it. But, I know the plans I have for you. They will bring about your eventual good.

In many ways, this context should be even more comforting. Just because bad things happen doesn’t mean that God has abandoned you. Even if they go from bad to worse and your life gives Job’s a good competition, you can take comfort in knowing that God plays the long game. He has a plan, and His plan is good.

I don’t know how my son’s math will turn out. I don’t know if he will manage to get a decent grade. But even if he doesn’t, I’ll be right there beside him to figure things out and help him through. And I am confident that whatever happens will be for his eventual good.

It’s 2020. You pretty much never know what craziness tomorrow will bring. I do know that tomorrow is the election. People are very divided. No matter who wins, one set of people will be happy and celebrate while the other side will be upset and think that times are about to get very dark and tough. Let me encourage you that whatever your circumstances—if your candidate loses, if you’re crying tomorrow and convinced the world is ending, if you’re sick, if you’re facing tragedy, if 2020 has just been a tough one, or if you just bombed a math test…

Listen to the gentle whisper that echoes an entire Bible of the same message:

It will be okay. I already have it figured out. I love you.

2 Responses to The Words You Need to Hear