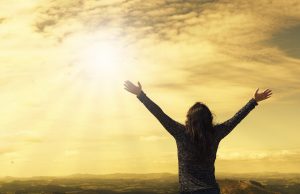 Have you every prayed really hard for something really important, only to have your prayer go unanswered? I’m not going to fluff this up and list all of the clichés that don’t give the issue the struggle it deserves. It is tough. It is something every Christian struggles with. Our prayers are supposed to be answered, right? But sometimes they aren’t. So what do we do with that?

I am not a Biblical scholar, and I don’t know the church answers. All I do know is that I recently had first-hand experience with this question that seems to plague the faith of many, if not all, Christians at some point. Though not the first time, last week, my desperate prayer went unanswered, leaving heartbreak in its wake. But to tell the full story of my unanswered prayer, I really need to start at the beginning, for it is actually not my own story.

My cousin, Mitch, was more than a few years older than me. He lived next door at my grandma’s house off and on until he graduated high school. I remember waiting at the bus stop and Mitch singing about “roly poly fish heads” just to tease us little kids. We would beg him to stop, and he would keep singing.

Yes, Mitch was an incurable tease, but he also had some issues that even as a child, I was aware of. How did I know? Because I remember my grandma’s tears. I remember her crying over the bad decisions Mitch had made, agonizing over what would happen to him, and constantly praying for his salvation. Decades passed, and she never stopped praying for him. Even with heartbreak and seeing zero results to her prayers, she still loved and prayed for Mitch constantly. She prayed for him to turn to the Lord, for him to turn his life around, and she prayed that she would turn around to find him in heaven. On her better days when her faith was strong, I remember her speaking about Mitch as if there was no question in her mind. “I have prayed for Mitch.” And that settled that.

Grandma didn’t live to see her prayer answered fully. My understanding is that some of Mitch’s trouble continued into his adult life, though I don’t know the details. However, Mitch celebrated his 51st birthday recently, and I’m happy to say that his life has changed. He turned to the Lord and became a Christian, and not just in name only. A year ago, he married the love of his life. She had three children, and they became Mitch’s children in every way that mattered. Mitch’s Facebook posts have been filled with him marveling about how blessed he is, especially with his wonderful wife and kids.

I’ve had a chance to get to know Mitch more the past few years. We’ve seen him in fun and sad times. We’ve laughed at family reunions and cried through funerals. Mitch and I have an aunt who lives on the coast where he lives. When my aunt lost both her sons a couple years ago, Mitch really stepped up. He was ready to help in whatever she needed and always told her, “I’ll always be here for you.”

Mitch hadn’t been feeling well recently. Things got so bad, that he went to the hospital, only to be life flighted to a larger hospital in an effort to save his life. As they were taking him to the hospital, he was still reassuring our aunt that he would be fine, he was strong, and he would always be there for her. Unfortunately, they discovered Mitch had MRSA in both lungs and Influenza A. His body was in such bad shape that they said it would take a miracle for him to live.

Oh, how I prayed for that miracle! Our whole family did. Mitch’s wife and kids desperately needed him. Our aunt had already faced such tragedy. Another one was incomprehensible. God is good and merciful, and I prayed based on those traits that He would save Mitch.

A few days after he was admitted to the hospital, we received word that Mitch’s kidneys were failing, and he wasn’t going to make it. After hearing the news, I had to drive home from dropping my daughter off at preschool. I cried and said audibly over and over, “This isn’t okay, God! It isn’t okay!”

Part of me was angry and very frustrated. What’s the point of praying if God isn’t going to answer? And I was so very weary of feeling like my prayers aren’t answered.

Then I felt a gentle knowledge seep into my spirit. It wasn’t a voice, and I don’t even know the moment of realization. But it was an awareness of God clearly saying. “I did answer a prayer today.”

Grandma had prayed for Mitch to make it to heaven, and today, he made it and found her waiting.

So why do we pray? Because our prayers are more powerful than we can imagine. Each one reaches to God in such a way that it remains even after your time on earth is gone. Even though God took Mitch home, I still believe that my prayers for His goodness and mercy will be answered for Mitch’s family. Sometimes I think we get too wrapped up in the time aspect of our prayers, and it takes prayer for us to communicate with God and understand that He is without the constraint of time. In the book of Revelation, the prayers of the saints are described as incense before the throne of God. That’s a wonderful image because incense is of great value and is something pleasant you are aware of in every breath you take. I believe that’s how God sees our prayers. They are not temporal like the world in which we live. Instead, they remain before Him, waiting for the day when God says, now is when I answer this one.

This is not a new concept to me. I remember the very last thing my grandfather told me before he passed away. He was dying, and I had to leave. I knew I would never see him on this side again, and he knew it as well. He told me, “I am praying for you.” I think in the moment, I said something like “No, Grandpa, I’m praying for you.” Only after did I realize what precious final words he gave me. He was praying for me. His final moments as his body failed were spent in prayer on my behalf, and those prayers have lived so much longer than his last breath. He was giving me the gift of his love and influence in God’s provision for me that would likely carry me to the end of my own life. Years and years later, I have great comfort knowing that he prayed for me. Those prayers are before God still today, and He is acting on them.

Though you may not get your answer here on earth, you can definitely leave a legacy of prayer that God will continually hear long after your physical words are silenced. It doesn’t make tragedy okay or understandable. It doesn’t answer the “why” questions of now. But someday, when you are enjoying eternity, maybe you’ll turn around and see that which you have longed for. Maybe, like Grandma, you’ll see that, today, God answered.

One Response to Unanswered Prayer