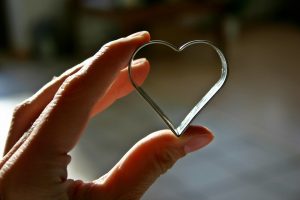 No good deed goes unpunished. It’s a cliché that often, unfortunately proves true in daily life. Sometimes, when I finally get the guts to do something, events do not go in my favor, and I end up feeling battered when all I wanted to do was accomplish something good.

Last month, I saw on Facebook that a woman from my church was having a rough time to close out a really rough year. Her husband had been very ill with one thing after the other, the latest being cancer. She is his caregiver, and now was experiencing some debilitating health issues as well. I felt such compassion for her and wanted to do something to help.

Of course, doubt immediately chased the heels of my good intentions. What could I do that would be helpful? Maybe I could cook a meal. Hello, inferiority complex! My cooking isn’t good enough. I don’t know what they like. They probably wouldn’t like it even if I did cook something.

Nothing I could possibly do would ever be good enough.

I stopped myself, trying to shut out all of the excuses. I knew I could easily talk myself out of doing anything. After all, I have my own family to feed, I do all kinds of things for other people, I had already exceeded my “kind quota” for the month, and I had a mile-long to-do list begging for my attention. No one would think less of me if I didn’t take on this one.

Is giving nothing better than giving my something, no matter how inadequate it is? If I tried, at least my friend would know I cared. But if I talked myself out of it, she’d never know that I cared and longed to help make things better for her.

“When it is an act of kindness, there should only ever be one answer to the question of ‘maybe I should.’ The answer should always be ‘Yes.’”

It is a line I wrote in a book that haunts me every day. When I wrote it in “A Cinderella Christmas,” I didn’t realize that it would change my own life so profoundly. Now, when a compliment to someone pauses on my lips or I wonder if maybe I should do something to try to help, the same doubts always creep in as my mind tries to talk me out of the work and the risk. Then that line comes back to me., leaving no room for my escape. I take a deep breath. Lord with your help…  And I say yes.

I reached out and found out that several members of our church were already signed up to take meals, and I volunteered to be one of them. I decided to do myself a favor and do an easy meal that I make all the time for my family—chili and cornbread. My kids love it, so I hoped it would be good enough.

The day arrived, and I was optimistic. I let my kids choose a dessert, and I made chocolate chip cookies first. Those came out pretty well, with me managing to only get one batch a little too toasty. Then I prepared the chili. I usually make chili in my Instant Pot, which I love, but sometimes, if I brown the meat in the pot, a layer of chili sticks to the bottom and prevents it from reaching pressure. To play it safe, I browned the ground beef separately on the stove and then transferred it to the rest of the chili in the Instant Pot. I then made the corn bread. It’s a very easy family recipe that I do all the time, and my kids love it.

I put the cornbread in the oven and saw that I was running behind schedule. Then I looked at the Instant Pot. To my frustration, It was not reaching pressure. I called an immediate “abandon ship,” and hurriedly transferred the chili to a pot on the stove. Then I checked the cornbread. The picture should adequately describe my horror. 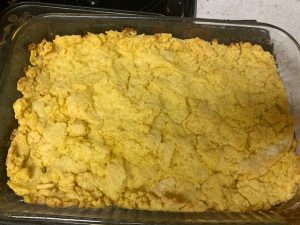 Frantically, I grabbed a new bowl, which was difficult since I’d already managed to dirty every dish in the kitchen. I ran to the pantry to grab my ingredients again. My 8-year-old got in my way, and I snapped at him. (Cue guilt and an apology I gave later.) I mixed up more cornbread while I hollered for my husband to come help clean some of the dishes so I had something to work with. More cornbread in the over, texts sent telling my sweet friend that I was running late on dinner, and uncooperative chili finally simmering on the stove.

Long story short, my husband made the dinner delivery about thirty-five minutes late. The chili was cooked, the cornbread was fluffy, and the cookies weren’t burned. But I, myself, was left way over-cooked, not fluffy at all, and a completely burned-out mess!

No good deed…. And yet my friend knew I cared. My meager inadequacies were still better than nothing, and for me, that was good enough.

My kids made her get well cards that we took with dinner. They also knew what happened. They saw me struggle and keep going to serve someone else. And they’ll see me do it all over again the next time I feel led to help another person.

If I attempt an act of kindness and completely screw it up, ending up frazzled, embarrassed, and wondering if I never should have done it in the first place… you know what? The answer is still yes.

« Christmas Scavenger Hunt Round Robin: Once Upon a Christmas Have a Fab New Year Giveaway »